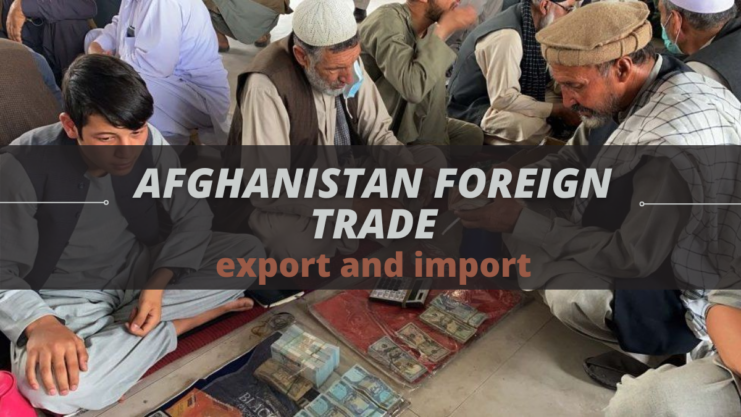 Afghanistan’s chief exports are Gold, natural gas and dried fruit. Other exports include carpets, fresh fruit, wool, and cotton. Afghanistan imports food, motor vehicles, petroleum products, and textiles. Most of the foreign trade of Afghanistan is controlled by the government or by government-controlled monopolies.

The USSR was Afghanistan’s chief trading partner even before the 1979 Soviet invasion, and this relationship intensified in the 1980s. The leading purchasers of Afghan products, in addition to the USSR and the former Soviet republics, have been Pakistan, Great Britain, Germany, and India. In 1991 exports amounted to about $188.2 million, while imports cost $616.4 million.

After the collapse of the Taliban Government in 2001, Afghanistan opened up to international trade. The State has very few commercial barriers for imported products, and customs duties remained flat in 2016 given weak imports. However, the poor state of its infrastructure, a legal and business framework that is still under development and continued insecurity act as de facto trade barriers.

Nonetheless, at the end of 2015, Afghanistan’s application to join the WTO was approved by its member states. Furthermore, the IMF and Afghanistan have been working to establish economic policies to improve the country’s trade balance since 2010.

With an increase in exports and slower growth for imports (due to weaker domestic demand), according to the Central Statistics Organization of Afghanistan, the trade deficit is estimated to have improved from -36.7% of GDP in 2015 to -35% in 2016 (with a deficit of USD 7.151 billion). Traditional Afghan export products, such as dried fruit, carpets, cotton, cereals and non-alcoholic beverages, have increased since 2013.

Nonetheless, the value of imports remains four times higher than that of exports, and if it weren’t for international aid, Afghanistan would have a substantial trade deficit. The development of trade with Central Asia and Iran could increase exports along with the opening of a new railway linking China to Afghanistan via Kazakhstan, Uzbekistan, Kyrgyzstan and Tajikistan.

Afghanistan’s primary export destinations are Pakistan (33% of total exports), India (28%) and Turkey (7%), followed by Iran, UAE and Russia. Afghanistan is also the world’s top producer and exporter of opium.

Afghanistan imports roughly USD11.5 billion worth of consumer goods annually, and Irani products account for 22% of total imports. The other main import partners are Pakistan, China, Uzbekistan and Turkmenistan.

Despite holding over $3 trillion in proven untapped mineral deposits, Afghanistan remains one of the least developed countries on the planet. About 35% of its population is unemployed or lives below the poverty line.

Many of the unemployed men join foreign-funded militant groups or the world of crime, particularly as smugglers. The Afghan government has long been pleading for foreign investment in order to grow and stabilize its economy.