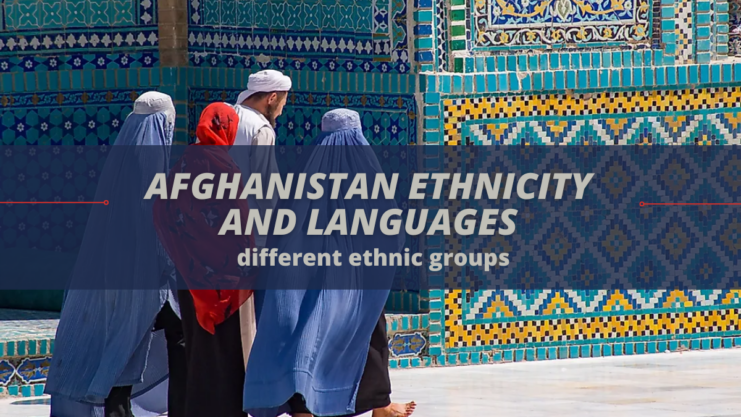 The population of Afghanistan includes many different ethnic groups. The Pashtuns (Pushtuns), who make up more than half the population, have traditionally been the dominant ethnic group. Their homeland lies south of the Hindu Kush, but Pashtun groups live in all parts of the country. Many Pashtuns also live in northwestern Pakistan, where they are called Pathans.

Pashtuns are usually farmers, though a large number of them are nomads, living in tents made of black goat hair. Male Pashtuns live by an ancient tribal code called Pashtunwali, which stresses courage, personal honor, resolution, self-reliance, and hospitality. The Pashtuns speak Pashto, which is an Indo-European language and one of the two official languages of Afghanistan.

The Tajiks (Tadzhiks), are the second largest ethnic group in Afghanistan. They live in the valleys north of Kabul and in Badakhshan. They are farmers, artisans, and merchants. The Tajiks speak Dari (Dari is the original language prior to Farsi then later the name was changed to Persian by the Iranians), also an Indo-European language and the other official language of Afghanistan. Dari is more widely spoken than Pashto in most of cities. The Tajiks are closely related to the people of Tajikistan.

In the central ranges live the Hazaras. Although their ancestors came from the Xinjiang region of northwestern China, the Hazaras speak an archaic Dari. Most are farmers and sheepherders.

The Hazaras have been discriminated against for a long time, in part because they are minority Shiites (followers of Shia Islam) within a dominant Sunni Muslim population. In the east, north of the Kabul River is an isolated wooded mountainous region known as Nuristan.

The Noristani people who live there speak a wide variety of Indo-European dialects. In the far south live the Baluchi, whose Indo-European language (called Baluchi) is also spoken in southwestern Pakistan and southeastern Iran.

To the north of the Hindu Kush, on the steppes near the Amu Darya, live several groups who speak Turkic languages. The Uzbeks are the largest of these groups, which also include Turkmen and, in the extreme northeast Vakhan Corridor, the Kyrgyz people.

The Kyrgyz were mostly driven out by the Soviet invasion and largely emigrated to Turkey. All of these groups are settled farmers, merchants, and seminomadic sheepherders. The nomads live in yurts, or round, felt-covered tents of the Mongolian or Central Asian type.

Prior to the war important political positions were distributed almost equally among ethnic groups. This kept ethnic tensions and violence to a minimum, though the Pashtuns in Kabul were always the politically dominant group. In the mid-1990s attempts have been made to reestablish shared rule; however, many of the ethnic groups have sought a greater share of power than they had before the war, and violence is a common result of the disputes.