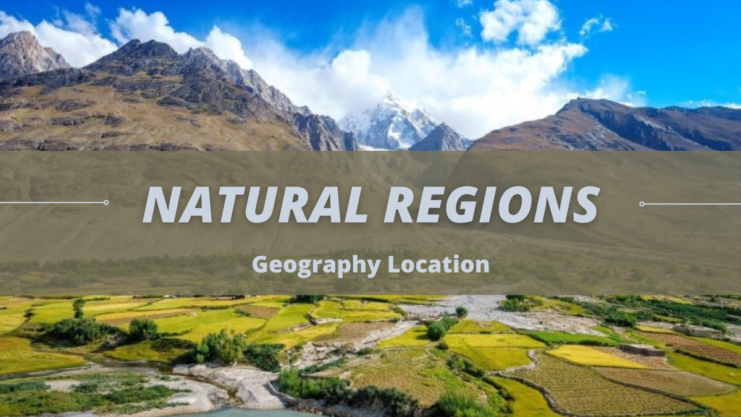 High mountains cover much of Afghanistan, with about one-half of the land over 2000 m (6600 ft) in elevation. Small glaciers and year-round snowfields are common. The highest peak, Nowshak (Noshaq), rises 7485 m (24,557 ft) on the northeast border and is a lower spur of the Tirich Mir peak in Pakistan. The Hindu Kush range extends across the country in a southwesterly direction from the Vakhan Corridor almost to the Iranian border.

From the Hindu Kush, other lower ranges radiate in all directions. Some of the major ranges include the Pamirs in the upper northeast of the Vakhan Corridor, the Badakhshan Ranges in the northeast, the Paropamisus Range in the north, and the Sefid Koh range, which forms part of the frontier between Afghanistan and Pakistan.

Lowland areas are concentrated in the south and west and include the Turkistan Plains, the Herat-Ferah Lowlands of the extreme northwest, the Sistan Basin and Helmand River valley of the southwest, and the Rigestan Desert of the south.

Except for the river valleys and a few places in the lowlands where underground fresh water makes irrigation possible, agriculture is difficult. Only about 15 percent of the land is suitable for farming. Moreover, a war with the Union of Soviet Socialist Republics (USSR) in the 1980s and the subsequent civil war in the 1990s left some of that land unusable because of neglect, the planting of explosive mines, and other problems.

In general, sheep and goat grazing make up the main agricultural land use. In eastern and southeastern Afghanistan, forest lands amounted to about 2 million hectares (about 5 million acres), or about 4.5 percent of the country, before the war. The ravages of war, the scarcity of fuel, and the need for firewood for cooking and heating have caused rapid deforestation.

Because Afghanistan has so many high mountains, the passes through them have been of profound importance in both the history of the invasion of the country and in commerce. In the 320s BC Alexander, the Great invaded the country through the Kushan Pass (about 4370 m/about 14,340 ft) in the west and left it to the east through the low Khyber Pass (920 m/3018 ft) to invade India.

These same passes were used by the Mughal emperor Babur to conquer both Afghanistan and India in the 1500s. The famous Salang Pass (about 3880 m/12,720 ft) and its Soviet-built tunnel in the central Hindu Kush were one of the main routes the Soviets used to invade Afghanistan in 1979.